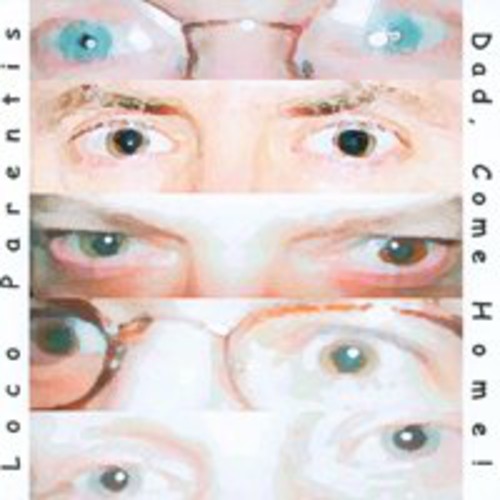 'Loco Parentis' is the newest CD from Dad, Come Home! This is a great collection of new tunes that rock a little harder than the first CD yet still run the wide range of styles that Dad is known for. Dad, Come Home! Came together in Shutesbury, MA during 1995. All were veterans of the local Western Mass music scene. All threatened to sing at any time, all wrote songs (we're working on Alan to loosen up and give us one or two), and all are fans of gamut rock*. Being ensconced in middle age, we were able to eke out time on Friday nights to gather at Eric's house and play, audition and arrange new tunes, and to exorcise our G.A.S. attacks (Gear Acquisition Syndrome). As part of our G.A.S., we started amassing recording equipment - first John's Roland VS 1680 and Eric's ADAT and now Eric's Pro Tools LE on a big new Mac. The result of all this has been a Rock'n'Roll support group and our first CD, 'Are We There Yet?' and now 'Loco Parentis' The Players Rich 'Reach' Cahillane sings, writes, and plays basses, fretted, fretless, fretful, four string, six string, and all kinds guitars when allowed. He is the head engineer for the recording projects. He lists his musical influences as The Band, NRBQ, XTC, The Grateful Dead, Dan Hicks, Hooligan and Jo Mama. Alan 'Snake Eyes' Kurtz sings and plays myriad percussion (drums, djembe, and bongos to name but a few). He has been influenced by the drumming of Rufus Jones, Kenny Aronoff, and his teacher. Alan is also nicknamed 'The Onion' because, even though the rest of the others have known him for over five years, he still manages to surprise them with new tales from his past. 'Jukebox' John Hayman sings, writes, and plays guitar. He likes The Beatles, Louis Jordan, Nick Lowe, Lucinda Williams, Dick Dale, and Chuck Berry, not necessarily in that order. He used to know approximately a million songs but got older and forgot about 80% of them. That still leaves a lot. Eric 'Eric' Stocker sings, writes, and plays guitar, keyboards, and triangle. He is moved by Brian Wilson and The Beach Boys, NRBQ, Buck Owens, Steve Earle, and Brian Wilson. He is also owner of Sounds Simple Studios where Dad, Come Home! Practices the three 'R's'-rehearsing, recording, and reminiscing. Bob 'Zorgon' Gould...Little is know about this mystery man. He showed up one day in 2000 just as the millennium turned and was immediately recognized as a major KEYBOARD talent and loose canon. No one could make him leave. We told him he could be in the band but he should live and work in New York City to be closer to the record industry and that he should keep a close eye on the NYC water supply. Zorgon and his ravishing underwater bride Lesley have been a part of the Dad family ever since. (Do not give this man Vanilla Stoli if you see him...you'll be sorry if you do!) He lists his influences as Warren Zevon, Buddy Miller, The Grateful Dead, Neil Young, Lucinda Williams, The J. Geils Band Steve Kurtz (Alan's brother)has become a regular on the Sax but prefers to play his cards close to the vest. More on him later *'gamut rock' is a term first credited to WRSI DJ Johnny Memphis. The Beatles started it. Funk & Wagnall defines gamut as 'the whole range of anything'. Collectively we have about 200 years experience listening to music and our influences are all over the map. Basically, it's music with melody, harmony, humor, thought, and a good beat that is likely to draw from any musical source (sometimes all at once!).