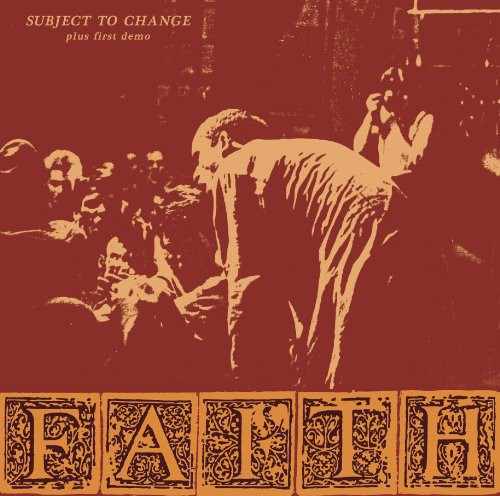 The fall of 1981 found the Washington, DC punk scene in one of the first of many fallow periods when a number of active bands broke up at the same time. SOA, Minor Threat, Red C and the Untouchables had all split, and a number of the musicians reorganized. Mike Hampton and Ivor Hansen from SOA formed a new band with Alec MacKaye of the Untouchables singing and another Wilson High School kid, Chris Bald, on bass. They called themselves the Faith and played their first show at H.B. Woodlawn High School in November '81. At the end of 1982, Eddie Janney (also a former member of the Untouchables) joined Faith as a second guitarist and six months later they recorded the Subject to Change 12-inch EP. Though clocking in at less than 14 minutes, this record was hugely important, not only to the people in DC but to others around the country and the world that were interested in the music emerging from the nation's capitol. On Subject to Change, Faith introduced a layered, melodic approach that would blossom fully in later Faith-related bands like Rites of Spring and Embrace. Unfortunately, by the time anybody heard Subject to Change, the band was no more. Interpersonal strife proved too much and they played their last show in August 1983. The record was released posthumously four months later. While Minor Threat is often held up as the preeminent DC band of the early years, for many of the locals it was the Faith with whom they felt the strongest connection. For this reissued edition of Subject to Change, Dischord has expanded the release from it's original EP format into a full-length with the addition of eleven tracks from the band's first demo recorded in 1981 at Inner Ear Studios.