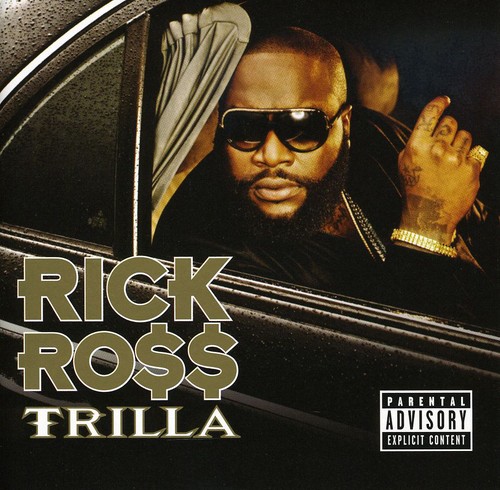 This second album by Miami rapper Rick Ross is one of the most hotly anticipated sophomore releases of the year. This collection is a more than respectable follow-up to his monster debut. The album produced by J-Rock, the Runners, Cool & Dre, and others features the hit single "Speedin'," with guest singer R. Kelly and the second single "The Boss". Includes guest appearances by Jay-Z, Lil Wayne, R. Kelly, T-Pain, the Game, Akon, Marsha Ambrosius, Flo-Rida, Trick Daddy, Triple C, Young Jeezy.

''Trilla'' is the second studio album by Miami rapper Rick Ross, released March 11, 2008 on Slip-n-Slide Records, Def Jam Recordings and Poe Boy Entertainment. The first single was "Speedin'" featuring R&B singer R. Kelly. "Street Money" featuring Flo Rida was thought to be the second single, but was released as a street single and it did not make the final cut. The second single was chosen to be "The Boss" featuring T-Pain instead. His third single is "Here I Am" featuring Nelly and Avery Storm. Other guests on the album include Mannie Fresh, EbonyLove, DJ Khaled, Trey Songz, Jay-Z, Lil Wayne, Trick Daddy, Young Jeezy, Triple C's, Brisco, Rodney & J Rock. The album has now been certified gold by the RIAA, and has sold over 700,000 copies in the U.S. - Wikipedia

According to Merriam-Webster, a "trill" is the "alternation of two musical tones a diatonic second apart '"called also shake." According to www.urbandictionary.com, "Trilla" is "a combination of 'true' and 'real'" that Ross invented as a nod to Michael Jackson's Thriller. It may, we assume, contain the occasional trill. Now that you know everything's etymology, we can rap about Ross, who evidently isn't satisfied with the modest success of 2006 debut, Port of Miami. ("Hustlin'" was a minor late summer hit.) The little we've heard of this sophomore behemoth'"specifically "Speedin'," featuring the as yet not incarcerated R. Kelly'"boasts an epic synthscape not unlike the hits from DJ Khaled's out-of-nowhere We the Best. Khaled doesn't help out here, but Ross sure did his homework on both producers (Cool and Dre, the Runners, Lil Jon, Mannie Fresh, J.R. Rotem, J Rock) and guests (Jay-Z, Lil Wayne, Andre 3000, Brisco, Triple C, T-Pain, Pharrell, Trey Songz, Freeway).